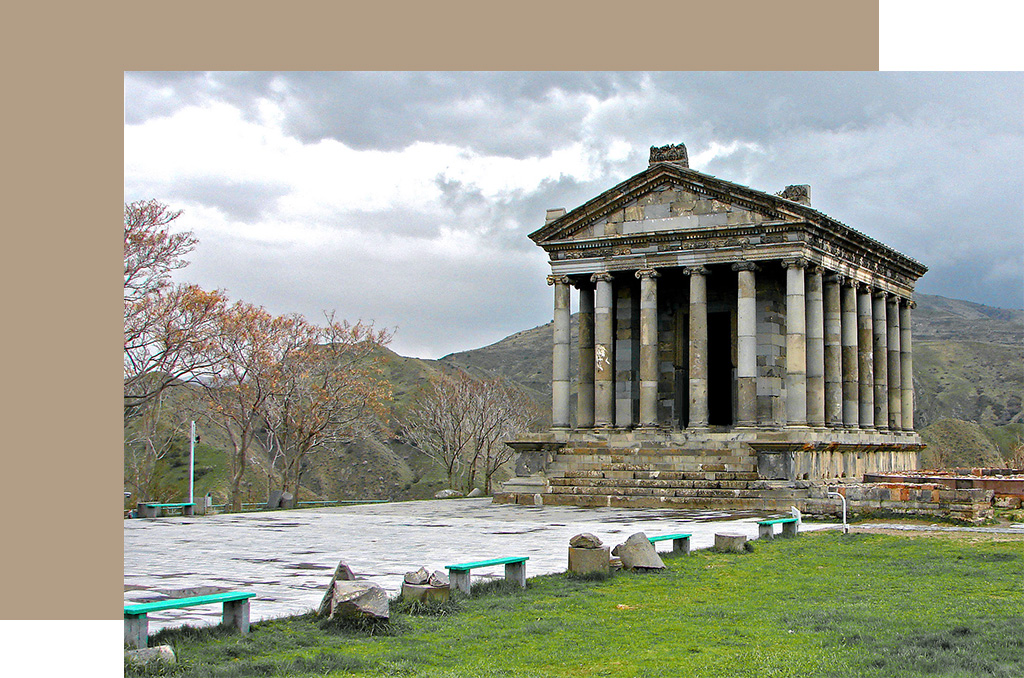 First, we head to the Temple of Garni which was built in 77 B.C.. This is the only pagan temple in the territory of Armenia, which was included in the list UNESCO World Heritage Sites. Back in pagan times, Roman Emperor Nero has expressed his admiration regarding this temple.

Geghard monastic complex consists of two main sections, built in IV-XIII centuries. Geghardavank is located on the Azat River gorge. The monastery is famous because of the relics that it housed. The most celebrated of these was the spear which had wounded Christ on the Cross, from which comes its present name, Geghard-avank ("the Monastery of the Spear"). The monastery complex is included in the ​​list of UNESCO World Heritage Sites. 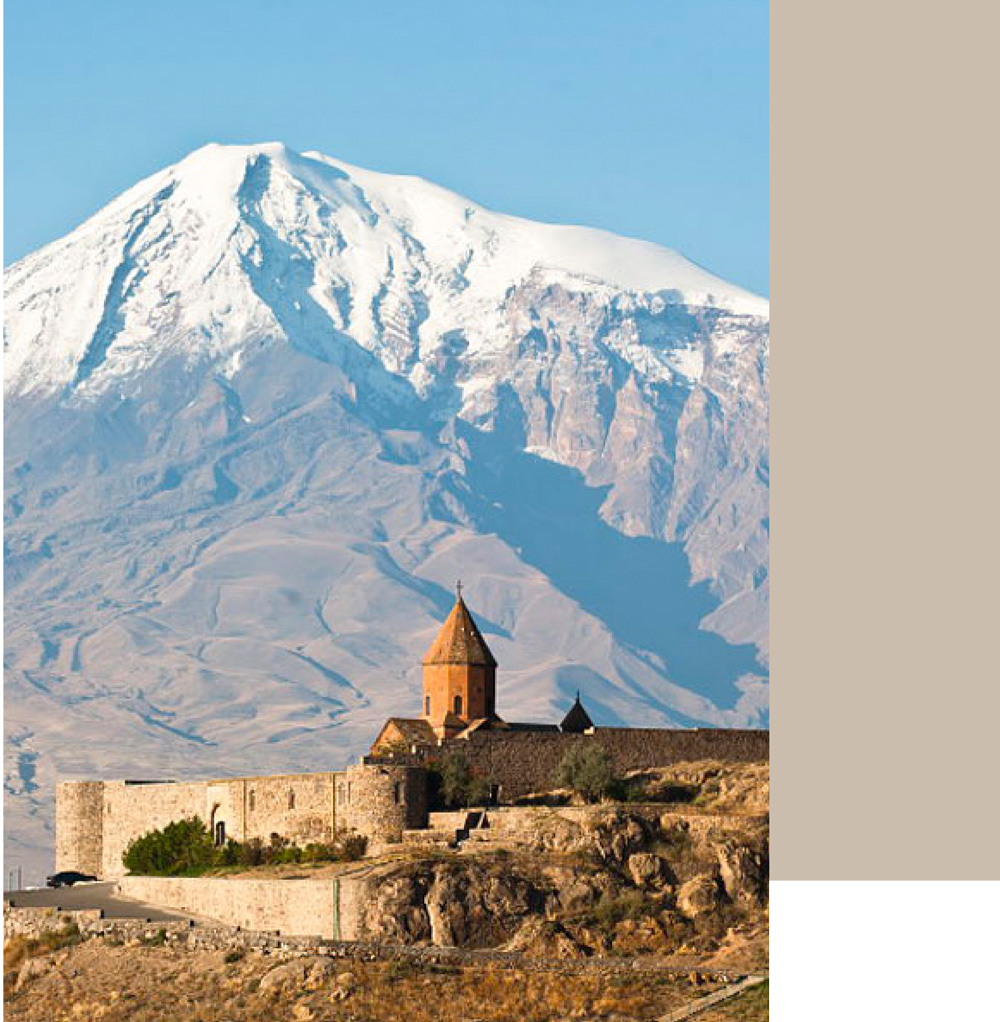 Trip to Ararat Valley. The Khor Virap monastery was built in IV-XVII centuries. This monastery was built in the territory of the dungeon where the first Catholicos of Armenia Grigor Lusavorich was imprisoned for 13 years. This is a popular pilgrimage site for all the Armenians around the globe!
The Village of Areni is considered to be one of the centers of Armenian winemaking. Shortly after visiting the village you’ll find yourself tasting the aromatic wine produced in one of the local factories. The next destination is Noravank.

Lunch in the neighborhood of Noravank.

Noravank was built in the XII century. The road to Noravank passes through a canyon full of caves. Noravank is considered to be the "pearl" of the Armenian medieval architecture. After Noravank we will continue our excursion to a mountain spa town - Jermuk. You’ll be taken to see the sights of the town, and of course, the famous Jermuk Waterfall. 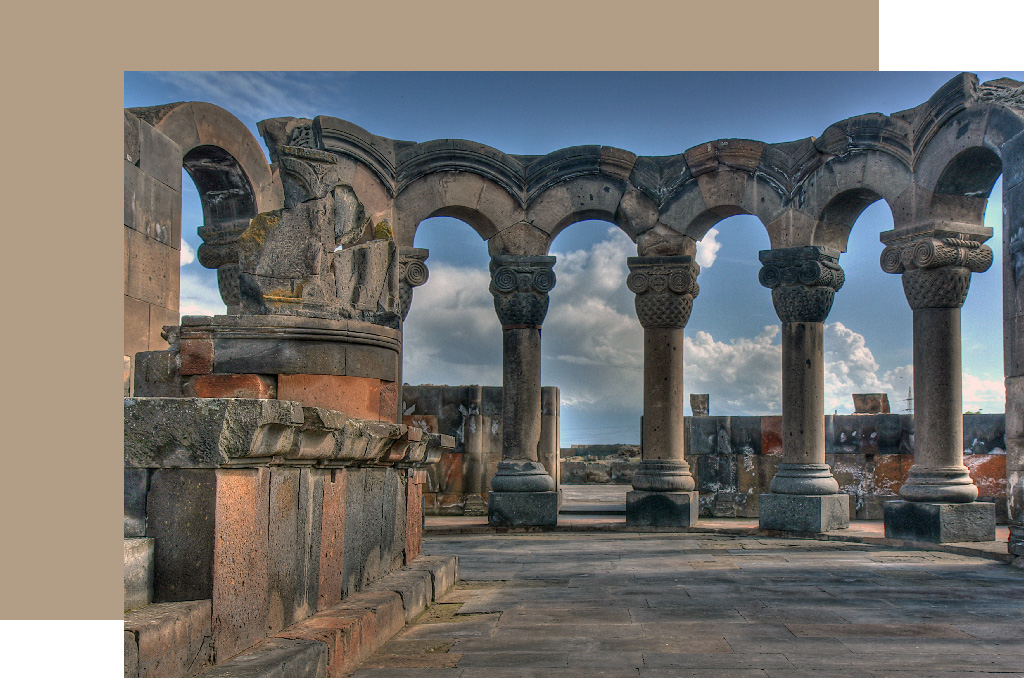 We will start our excursion from Vagharshapat (Echmiadzin), the ancient capital of Armenia. Echmiadzin Cathedral is one of the major religious constructions of the Armenian Apostolic Church. The temple was built in the IV century. It serves as the residence of the Catholicos. In Echmiadzin, we will also visit St. Hripsime, St. Gayane Churches, Mother Cathedral and The Treasury Museum of Echmiadzin.

The next destination is the Temple of Zvartnots. Zvartnots Temple was built in the VII century. It is one of the masterpieces of medieval Armenian architecture. As a result of the earthquake, the temple turned into ruins, a part of which was reconstructed.

Return to Yerevan. Dinner in Yerevan. 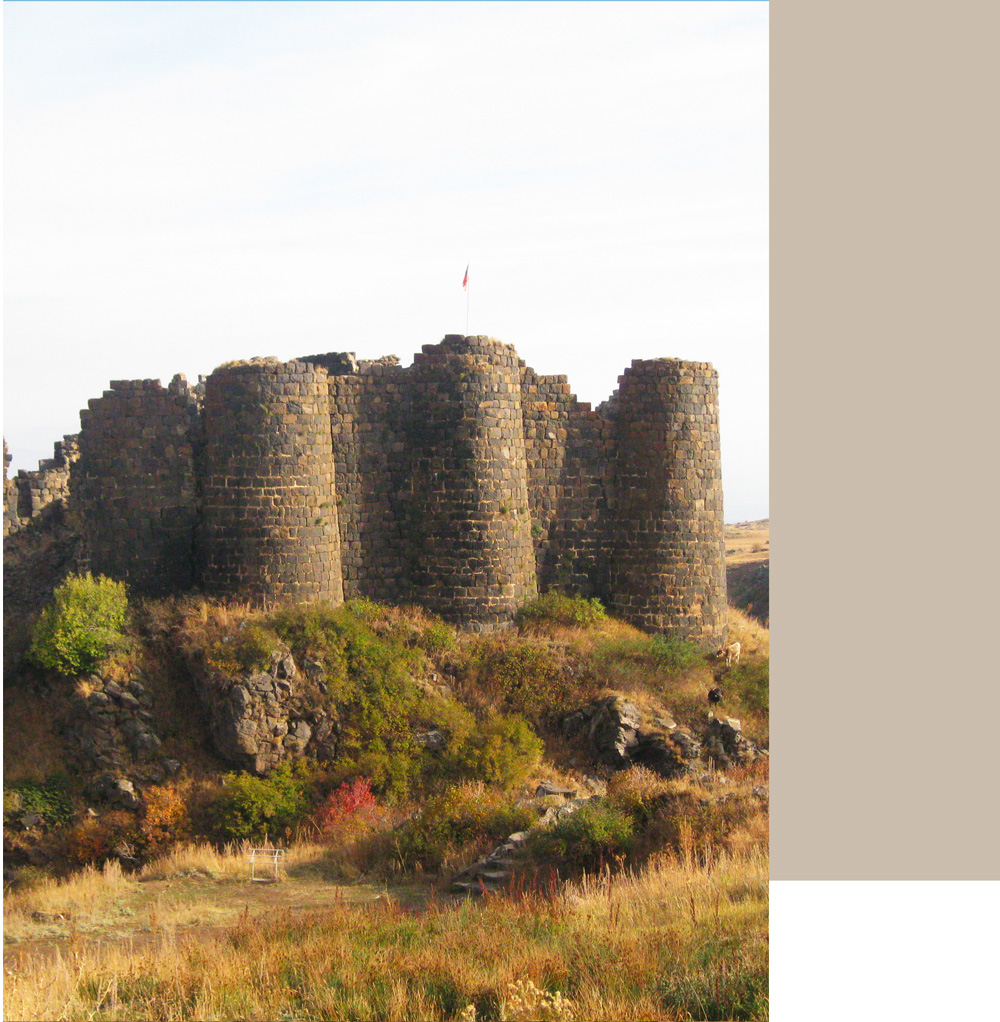 We will start the tour from a trip to Ashtarak. We’ll visit Karmravor (VII c.), Saghmosavank (1215) and Hovhannavank (1221). Then we’ll continue our excursion to the castle of Amberd which was the royal residence of Pahlavuni princes. There is a unique historical and cultural monument in the territory of the castle, that was built in 1026. Finally, you’ll see the Armenian Alphabet Monument, that was founded by Mesrop Mashtots in 405.

Dinner in Ashtarak. Return to Yerevan. 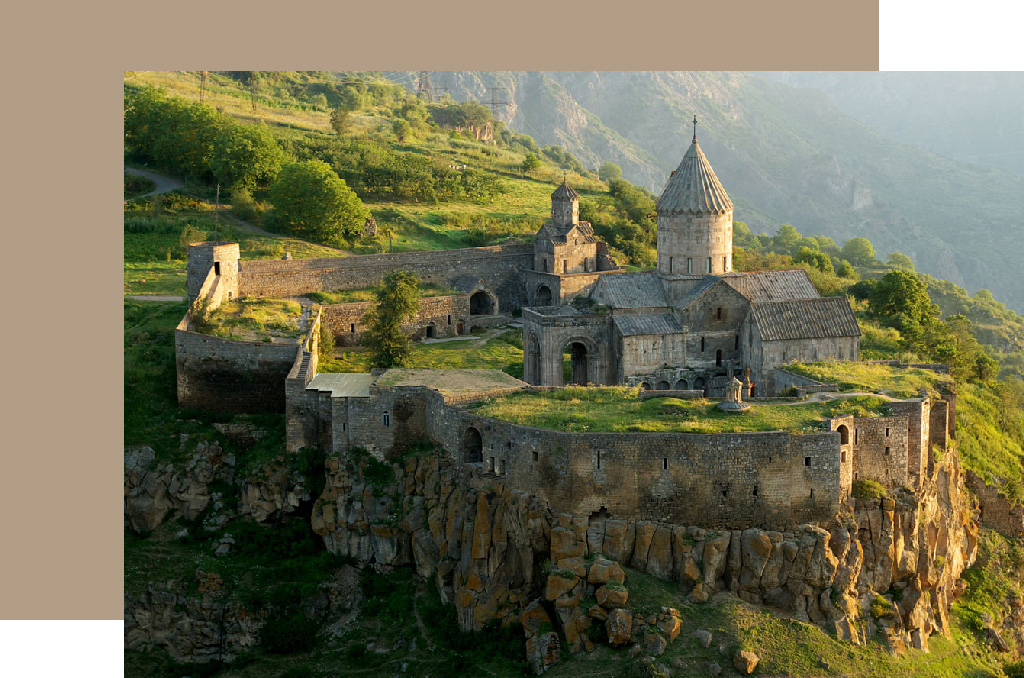 We will start the tour with a visit to Syunik region, south of Armenia. Our first destination will be Tatev Monastery (IX - XVIII cc.) which is considered to be the pearl of the Syunik “world”. According to a belief, the monastery was named after the successor of the Apostle Thaddeus - Eustatéus. From a tiny chapel it has been transformed into a regional center, then - an educational complex.

Dinner near the village of Tatev.

The visit to the ancient settlement of Khndzoresk will make it clear why Armenians are famous all over the world for their architectural skills. 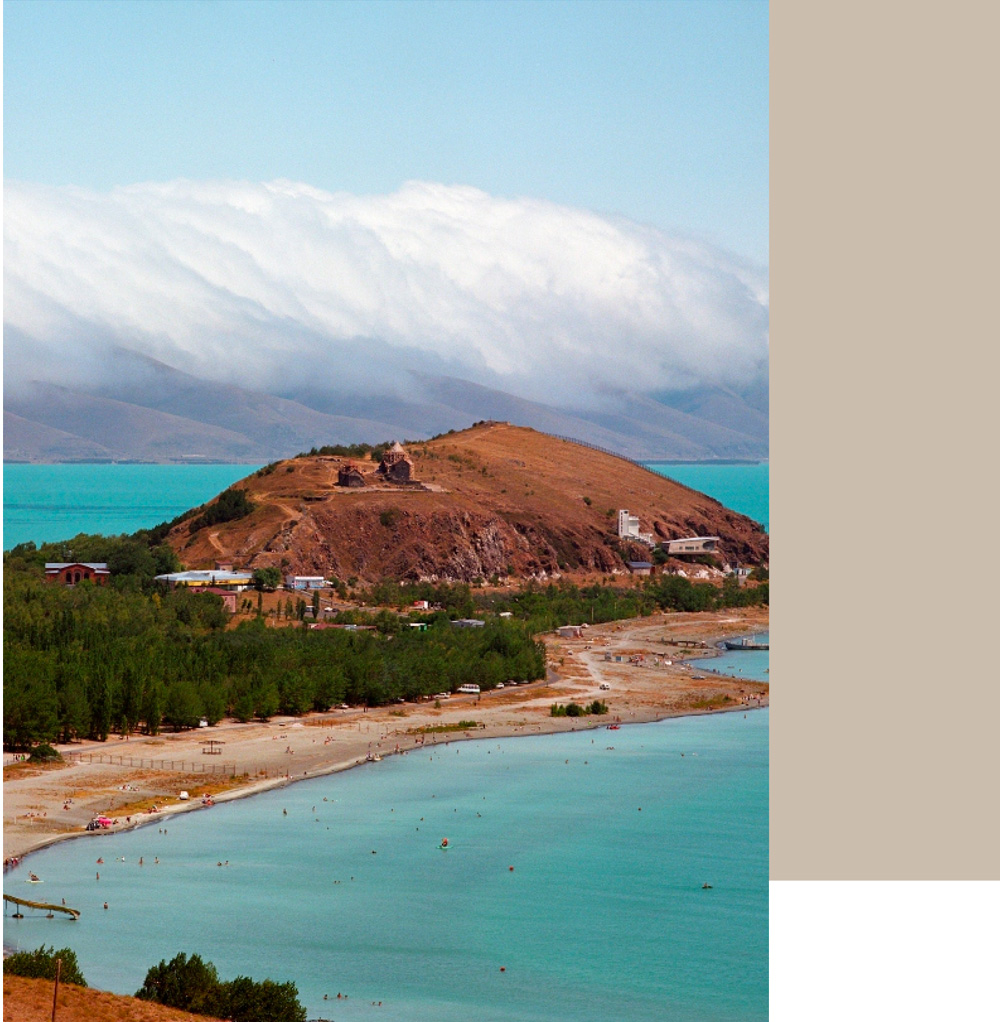 The first destination of our trip will be Lake Sevan, that is 1916 meters high above the sea level. It is one of the largest alpine lakes in the world. Here we will enjoy the beauty of the lake, and will visit Sevanavank, on the peninsula of Lake Sevan.

An option of having dinner near the Lake Sevan.

Our next destination, Tsakhkadzor, is a real heaven for winter sports lovers! Tsakhkadzor offers comfortable international hotel services and places of interest of  highest international standards to its guests. Here we will visit the Kecharis Monastery (XI-XIII cc).

We organize individual tours at our clients' request. The best sightseeing destinations are chosen for the tours.